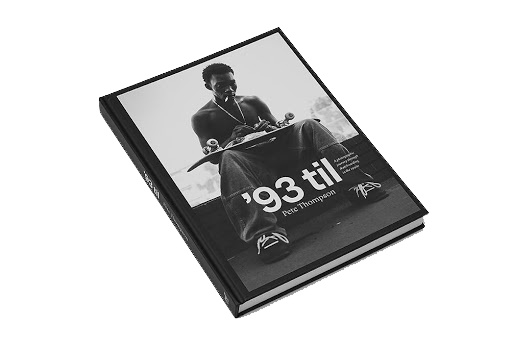 With this year’s 2021 Summer Olympics hosted in Tokyo, Japan, skateboarding will make its Olympic debut; augmenting both park and street competitions for men and women. As this book is a culmination and photographic collection of the past three decade’s growth of skateboarding throughout the US focusing in on the pivotal decade of the 1990s, the addition of this sport in the summer’s upcoming games is of considerable relevance to the skateboarding pioneers featured in this work.

To be a skateboarder today is a much different experience than it was for much of the 1990s. The photographs, quotes, and anecdotal text in ’93 til captures a time in skateboarding when making a livable income as a professional skater was a rare luxury and public understanding of skateboarding was at an all-time low. It was a time when skateboarding was searching for an identity, a time before Instagram and big corporate influences. Street skating was coming of age, testing its limitations and aligning itself with a new and innovative style of hip-hop culture that was emerging. Looking back, many skaters today feel as though the ’90s were the golden years of skateboarding. ’93 til is a captivating portal into a decade and a culture that is remembered with warmth and nostalgia. Much of the photography that Pete has unearthed for ’93 til was buried in boxes for close to two decades and has never been seen or published before. The 230-page book also contains several timeless images from his years shooting for SLAP and Transworld Skateboarding Magazine that will be familiar to the initiated. In addition to his stunning action shots are plenty of portraits and unguarded, candid moments that span from the late ’80s up through 2004. The book reveals a raw, unapologetic perspective of a world that no longer exists.

Also included in the book alongside Pete’s imagery are quotes and anecdotes from legends like Tony Hawk, Arto Saari, Jamie Thomas, Guy Mariano, Nyjah Huston, Geoff Rowley, Stevie Williams and others. Although still a working photographer, Pete moved on from his career in skate photography in 2004 and is currently living in Brooklyn.